Put them on once and keep going

Pants that offer more value. Pants for life. That's what ALBERTO stands for. And that's what ALBERTO can deliver like no-one else can. Why? Because, even at the pinnacle of fashion, the pants label always designs them to cater to the real-life needs of their wearers. You could say they're the quintessence of legwear. Pants tailored for the moment, for every moment of life, are an architectural design for the body. The love of traditional legwear craftsmanship is as much a part of ALBERTO's self-image as its desire to experiment. This is reflected once again in the pieces of the 2023 summer collection, where absolute classics in new, innovative materials and cleverly reworked designs meet brand-new models. What unites them all is the slogan: "Put them on once and keep going" - whatever the day brings.
Read article

Unconventional, driven by innovation and always one step ahead: these qualities are just as true for ALBERTO’s pants as they are for the company as such. More evidence of that can be found on the digital online store the enterprise just launched on the Metaverse. Besides creating a new shopping experience for its customers that eliminates geographic and physical barriers while it makes truly genuine pants available, the pants label from Mönchengladbach is focused on one primary objective: bringing to life community spanning experiences paired with creative freedom.
Read article

Alberto is about to celebrate its 100th anniversary. In the fashion industry, and in particular for an enterprise specializing in certain products, this is considered a virtual eternity. Hence, it is an occasion to celebrate. So, ALBERTO is doing just that. However, the company isn’t just launching an anniversary collection. It is also rolling out many exciting collaborations and an extraordinary anniversary program. Among them is a feature you can actually take literally in conjunction with the current buzz word “team play.” In partnership with Magdeburg-based bicycle manufacturer URWAHN, the label known for its pants is presenting an anniversary bike that offers distinctive departures from the familiar in terms of make, technology and design. It is also uncompromising – in other words – typically ALBERTO and typically URWAHN.
Read article 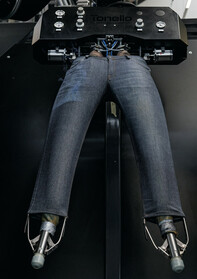 A family-run specialist that's been thriving on the market for 100 years can justifiably say that they've got things rolling in the long term. This is true once again for Born & Finished, the brand-new bike pants that were created in collaboration with 140Fahrenheit, that the Mönchengladbach-based pants label is launching as a gift for itself and others on the occasion of the company's anniversary. In more than one way, in fact.
Read article

When the fingertips fall in love

Winter Fun on the Fairway

The enjoyment of pleasant rounds on the green without shivering in the cold winter months has been possible for quite some time – thanks to revolutionary developments in Tech Golf Wear. As one of the pioneers, ALBERTO Golf has made extraordinary contributions to this evolution. For the next winter season, the company is launching new styles, innovative functions and novel colors as well as patterns to make an even bigger splash. Find out what golf enthusiasts can look forward to now!
Read article